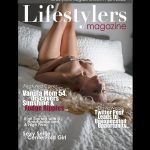 My couple and I had the fortune to go to Secrets Hideaway in Kissimmee, Florida, over New Years Eve 2021. We had a great time, and the weather was perfect. We made new friends and contacts in the Lifestyle.

However, two unexpected things came out of our trip there.

First, we kicked off the year with COVID.

It’s not as bad as you may think. It was the nose and throat variant: cold-type symptoms that were gone in a week.

The second was a little more exciting but even less expected. It all started with a Twitter post…

One month earlier: I had wanted to get something special for “Mark” and me to wear around the pool at Secrets. We had been collecting sexy bikinis for “Vanessa” to wear, but we didn’t have anything for ourselves.

I had heard of Esculpta cockrings from a friend on Kasidie. I had all I could do to remember the name, since she only told me once and almost a year had passed since I had looked at the website. A robust search enabled me to find the company again.

Ordering two of their Boa Debut Jockrings, we were set to display our cocks properly, as civilized gentlemen!

One day we wore them and took pictures on the giant red Secrets chair, Mark and I in all our glory wearing our rings, bookending Vanessa who wore a black and gold mesh WW bikini.

I posted the picture several days later on my Twitter, mentioning the company in the post, but not tagging them.

About a week later, much to my surprise, I received a direct message from Peter, the company representative!He loved the picture and retweeted it. He said he would like us to shoot male/female and MFM pictures with his products. The reason, he said, was that there was a misperception that cockrings were only used by the gay community, and as a result straight men were reluctant to use them.

Peter asked us to not only take pictures for him, he also asked that we get shots that are outdoors.

Now indeed, I do wish we lived in a Mediterranean climate, where there are plenty of nude beaches, or in South Florida, or other parts of the US, where there are great clothing-optional resorts. But we live in the upper mid-West, and it’s cold this time of year. In fact, it’s cold a lot! We do have great beaches, but none allow for nudity, and there are not so many good LS clubs either.

So for now, Esculpta, along with the three of us, would have to be content with pictures and poses done inside. However, as the weather heats up, we plan on getting out into the dunes of Lake Michigan, the forests, and other backdrops to produce photos that they can use and also tell a mini story.

Hotwife Vanessa and I inadvertently shot such a story soon after Peter contacted us. The series appears on Esculpta.com in their blog section, entitled “How to steal his cockring without getting noticed.”

Since that one, they have used several submissions as social media ads or posts.

When I look at my LS journey thus far, I am amazed how things have happened. What started out as taking nudes of myself in various outdoor settings back in 2016 as a form of expression, lead me to the LS after my divorce. I met Hotwife Vanessa right away. I didn’t want to stop there, but with a pandemic going on, and the fact that we hit it off well, I played with her regularly.  We developed a relationship from that almost-instant connection. I then developed a friendship with her husband, Mark, and we became a triad.

We now plan LS vacations together and are looking for ways to express ourselves and our sexuality in a way to influence others.

David is the author of Hotwife Dating Diaries and The Book Of Secrets on Amazon.Mark and Vanessa can be found at Michigannewbys, and the author at Davidwebbcdi, on Kasidie

It All Started With A Handshake and A High Five