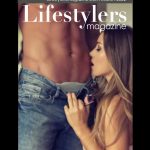 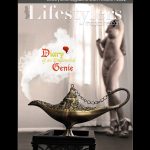 An outdoor lantern glowed high above the poolside. Here the fireflies seem to gather in a frenzy as the pull of electricity brought them closer to each other.  My instinct led me through the poolside gate, under a cascade of illuminating bulbs that both bathed and echoed our movement. The night took me back to my childhood summer evenings where the air was sultry. You could taste the fragrance of sweet sweat grazing your lip. The pool drew me in right away as I felt at home with the cool relief on my skin as I skimmed my toe across the surface of the water.  Easily and without dismay, I peeled my clothes off one by one. An automatic and sultry response to that of a striptease act. It was who I was, an exhibitionist indeed. Would anyone be interested? Could I find my first encounter of the evening? With a gentle ease into the pool, my hands stretched out in front of me as my body followed with quivering pulses. A deep breath, then an underwater submergence with only sound of my pulse until I exploded from the water. Hair slicked back and dripping, I caught his eye….

Locked and fixed, a connection was made. His body glistened just the way I like it. The seductive flight of the firefly and rhythmic arousal of flirtatious signals created tension. Foreplay had begun and the heated night was just beginning. My husband knew the look in my eye – and he knew I was ready. Following his lead, we proceeded to the foyer of the house with my new friend. Towels dropped to the floor as wet footprints led a path to an open area. With a drink in hand…more and more fireflies gathered to the now soft flickering impulse of candles – the inside light was as sensual as that of the outdoors. Finishing my drink, I quickly turned to my pool boy and reached up to pull him toward me in a soft, sensuous kiss that was as much to turn him on as it was to ignite the others around us. He was the perfect height – and his hardening cock was clearly uncomfortable for him. I smiled knowingly – locking my eyes on his, I traced my way down his abs and along his so-very rigidness. His date had watched us from close by, and I knew she wanted to join in –  yet was mesmerized by the vision of the two of us before her.   My attention turned inward as my husband traced his fingers down the lower curve of my back, placed his lips behind my ear and softly kissed the nape of my neck as he quietly murmured “I love watching you…”. He knew what made me weak, and quickly I was kneeling before him as his submissive pet. My tongue worked his shaft with slow upward strokes. He loved my hands-free movement on his shaft. (He would randomly whisper asides to me as we were out and about of how sensual it felt to just have just my lips and tongue connect with him – how those soft, targeted moments did more to send him toward the uncontrollable edge than even adding my hands…) A delightful tease and French kiss to the fat head of his glorious cock, I played with the sensitive underside using my lips and tongue. I moved slowly and sensuously …and wickedly dangerous as I longed to edge him. He knew that I had the power to make him cum, and he knew he had the power to make it stop – our sexual standoff was interrupted by my quick deep throat to both break his tension but bring him closer to the edge, to mark him with my final authority …. But now another hand was touching my back, and the power dynamic shifted.  Hands began to explore, caress and linger. More bodies began to fold and intertwine with mine. I found myself lost in direction yet safe with the security of human touch. While movements ran free and wild, others were pinned and held – sending mixed signals of where I was free and where I submitted to the power of another. I at once felt and heard how the oiled bodies were writhing amongst each other – soft whimpers, masculine groans and indistinguishable heavy breathes filled the air.  I joined the gasping when the overwhelming sensation of fullness from a thick cock entered me and both lit my further desire while satisfying a deep wanton ache. I was in complete rapture. I knew it was my pool boy – his. strength and desire for me gave him away. Fingers aided in playing with my pussy lips, lightly flicking my clit and sending jolts of desire through me…. Then tongues exploring and licking me as I became lost. Mouths tasting the sweetness and hint of my cumming while teasing my lips and sucking with pleasure.   The heat was building, and bodies turned hard with easy access to invitations of lust, ache and need.

Where my thoughts had become jumbled as I just plainly felt the pleasure within and around me, I suddenly had a singular focus as I watched my husband repeatedly thrust as another raven-haired woman had her legs wrapped around his back – I watched as his oh-so-cute ass clenched and released with each thrust, and I heard her matching cries. I wanted my partner to match his thrusts, for I knew exactly what she was feeling at that moment – but the pleasure I was feeling from behind was also so tantalizingly different and unique – I did not want it to end. Within reach I gripped a full, thick dildo that was tossed aside from a pair of beautiful young women who had used it as a strap on earlier – the first flames of our heated evening. A feeling of dominance overtook me as I reached a sexual pinnacle – my pool boy pulled me upwards and back up close to him so that I was just on my knees with him behind, cupping my breasts and grazing my sensitive nipples – sending sparks through me – I turned to kiss him as I felt him tighten and release inside me, his groans muffled by our kiss. I so love both the feeling and the sound of a man as he cums inside me!

Rather than quenched, I was now even more on fire – and I knew then what I wanted to do next… I wanted to know what it felt like to be in control, to give instead of get, to use another for my sole sexual pleasure.  My husband and I had spoken about these fantasies in detail, and we were both ready for these moments of raw sex where those fantasies were about to be explored and experienced. With reassurance in his eyes and words unspoken as I fitted the strap on and approached him, he remained on his knees and gave himself to me as I slowly penetrated his ass with the thick, long dildo that the women had earlier used to satisfy themselves. While others continued to play, others watched with pleasure and anticipation, but we were now in our own world – one of our own making and one where we alone travelled no matter who was with us or who watched. Arching his back to me he took me…. with methodical, deep thrusts I moved my fingers from steadying his back, to reach around in front of him and stroked his cock to the rhythm I had set. Others joined in by touch, and the raven-haired woman now singularly focused on his pleasure, taking his cock fully in her mouth as I fucked him. I wanted him to concentrate on the woman in front of him, as I lost myself in this foreign feeling of control.  With his balls being licked I could sense the heightened erotic sensation he was having. His breathing became more rapid and his body tensed, the sensation overwhelming.  Fingers clenched, hands braced and locked, I could feel his body tighten and then he trembled – she took from him that what she could handle, but had to milk the remainder of his cum as he continued to spasm and writhe, connected to me and “my cock” until I alone decided to release him. The feeling of power and control, of giving, and of witnessing him was overwhelming to me.

The light was now out momentarily…fireflies dissipating into the dark. I flew to the next light, like a moth to a flame. Who would feel my heat next…?

Born and raised in the country, I enjoy simple pleasures and nature’s beauty - in many forms. My hobbies and interests center on art and athletics. My sensuality is cloaked behind a small town girl exterior; and I may surprise you with my dark side within. I continue to search for ways to express my inner sexuality while bringing others into my world. With intense passion and raw emotion it is my quest to find those ultimate experiences with other couples/ singles that will quench my thirst for all desires. My husband joins me on this journey as we both want to gain sexual freedom, expand our fantasies, and make new discoveries. You can find us together as “Squidcotz” on various lifestyle sites. Also the Author of “Flirting with Fireflies” series right here on Lifestylers Magazine.

Episode VI: How Brave Do You Feel?