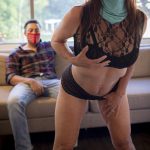 It’s fair to say that I have extensive experience as a Hotwife and therefore know how to find and choose my Bulls. That isn’t to say I haven’t dropped the ball here and there but for most part, I’m not disappointed when I meet a guy for a date. On one occasion recently though, I found myself short-changed. Just like when you put an order in for a Footlong Sub, and your colleague comes back with a Six Inch®.

To be fair, I was led to believe that this particular guy was hung. He said as much on his profile on The Site. He even listed his equipment as being in the ‘7-8 inches’ range so I felt confident that I’d be drilled adequately. In his infinite wisdom, my husband told me to get some dick pics before committing to a play date. He didn’t have any uploaded to his profile which quite often reliably proves to be a red flag (though not always either…). I diplomatically asked for a few shots. When I received them, I tried to remain optimistic. I forwarded them to my husband for assessment.

With that, I was left to decide to pursue a play session with this guy or not. Still feeling optimistic by the words ‘hung’ and ‘7 to 8 inches’, I chose to have him over one morning.

He did not have a big dick.

At around six inches and of average girth, it was a nice cock, but it wasn’t as advertised. In fact, his dick shots were flattering. I was actually mentally prepared to accept that my optimism was misplaced so when TNH (Tall, Not Hung) unzipped his jeans, I wasn’t overly surprised. Fortunately for TNH, he gave great head so while I didn’t feel completely railed, I still had a satisfying morning. Hell, I always have a good time!

So what am I complaining about then? Well I’m hardly a size queen, but I do value honesty above all else. Sure, I generally only post the more flattering photos of myself on Instagram and on my dating profile, but I don’t stretch the truth to a point where a man who meets me questions whether he got his contacts mixed up. When men tell me I look better than in my photos, then I know I’ve done the right thing. But telling a Hotwife that you’re hung when you’re not??

I was satisfied that TNH didn’t deliberately over-sell to get his foot in the door, though I know from other people’s experience that it can happen. In later conversations, I got the impression TNH actually does think his dick is mighty. He drops me a line occasionally to say how much he wants me to ride his cock again, to which I compliment his oral skills to change the topic. He was a very nice guy but for recreational sex, I can’t lie. I do like to be stretched.

The TNH experience got me nervous about another guy I met online who also wasn’t very forthcoming with penis photos. I was keen to meet for a drink regardless but since my husband thought we may as well play if we had a free night, I had to awkwardly ask for a dick pic and confirmation that he was at least average, if not hung.

“I’m not sure. I guess I’m average? I don’t tend to take photos of my dick sorry.”

My heart sunk. He ticked a lot of boxes as a Bull but I feared this was a case of lacking penis confidence.

“I’ll do what I can. I just have a lot of lower body tattoos so have to be discreet.”

And with that, I was rewarded with what looked like a decent sized cock. My husband concurred that it was not small.

Fast forward to our play date and let’s just say that I was not disappointed. He wasn’t crazy big but I had to concentrate hard to not gag. He’ll be invited over again.