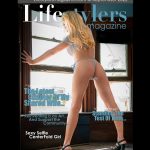 It’s difficult to imagine how the “swingers” of the 1970s and 80s connected prior to the internet. By the time we dipped our toes into the lifestyle, we had the benefit of websites, chatrooms, email and texting. These tools helped to protect our discretion as we formed new online connections prior to meeting new friends. Sites like Kasidie.comserved as wonderful launching points for many of our new lifestyle friendships in 2011 and 2012. One particular conversation had slowly developed over many months, growing deeper with each new note.

Her name was Meg and I felt so intrigued by my messages with her: uplifting, thoughtful, sex-positive, and empowered. We brainstormed about the 4 of us meeting in person, but the text exchanges felt valuable as well. Even if we didn’t meet in person, it felt amazing to simply share ideas with each other. I was learning new insights with each note she wrote, and finding my own voice as well.

Our correspondence evolved slowly over time, one or two notes each week, ultimately lasting several months. Eventually, the 4 of us selected a date that could work for a first meeting in person. It would take place at our favorite club in downtown Portland. We counted down the days for nearly 3 weeks, all four of us were finally ready to meet. We purchased the ticket in advance, we secured a sitter for our kids, and I selected several sexy outfits, one for the cool Oregon temps outside, and another for the hot club dance floor inside. The liberation of wearing provocative clothes was one of the many ways our new lifestyle was impacting my self-perception. I was hoping Meg would like the outfit I set aside for this special visit.

Unfortunately, she texted on Friday night to tell us she was feeling questionable for our Saturday date night. She was fighting a cold and didn’t know if they could make it. The disappointment hit me fast. Given how long we had waited, I suddenly wondered if they were a real couple or not. But we also understood that cancellations were inevitable. My skeptical thoughts quickly shifted as Meg continued to share her hopes and intentions for us to meet. She suggested alternate dates if she didn’t feel better for this one, and she assured me they would join us if possible.

In the midst of all that, I had also started a Kasidie email discussion with a new girl named Dawna. She was definitely younger than us, and her boyfriend was even younger than her. I didn’t ask her precise age, fearing that the gap would be uncomfortable for them. Instead, I “let it be” and embraced her bold mindset, as well as the fantastic nude photos she shared with us. She asked if we could meet up with them for drinks on Saturday night. We accepted their proposal, and shared that our previous plans were now uncertain. It felt great to be 100% honest related to scheduling, a contrast to the “little lies” that seem so prevalent in vanilla social life.  I explained to Dawna that we could meet with them early, but our connection time may be limited since we had later commitments at the club. She said no problem, and shared that they wanted to try the club for the first time as well.

Dawna was even sexier in person, but both of them looked younger in person as well. We quickly realized Dawna was one of those “old souls.”

So the 4 of us met up early for drinks, still uncertain about the status of Meg & her husband, Antonio. We connected at the Irish pub across the street from the club. Dawna was even sexier in person, but both of them looked younger in person as well. We quickly realized Dawna was one of those “old souls.”  Despite the age gap, she had a lot in common with the two of us, especially related to pop culture: music taste, favorite movies and television shows. I was excited to learn that she loved my favorite female singer: Sarah McLachlan. The conversation flowed as easy as the drinks. I had just finished my first, and decided to pull away from the lively conversation to freshen up. As I walked away, Dawna leaned over to G and said “Wow, Genie is smoking hot. I’m already fantasizing about going down on her.” The grin on G’s face was readily apparent when I returned. I didn’t know what I missed (yet), but I felt excited to find out.

The 4 of us walked across the street to the club and began our monthly ritual: standing in the short arrival line, and ushering our way in to the locker area after being checked in. We met up in the dining room and grazed on some food from the club buffet. The two of us said hello to a few familiar faces from previous visits. The banter and conversation continued strong with Dawna and her boyfriend. The dance floor was getting started at 10 pm and they excused themselves to go change into a more revealing outfit for her.  I checked my phone, and felt excited to see the update message from Meg. She said she was feeling better after all. They decided they would drive to the club to meet up with us around 10. Yaaay! It was already past 10 so we started to step away from our table at the very moment they emerged. She was gorgeous: a beautiful brunette with a gorgeous smile and sexy curves. He had a classic tall, dark, and handsome look. Both of them were even more attractive in person than I imagined. It was our first live meeting together, but I felt like we were already friends. The months of correspondence had definitely paved the way for an immediate sense of connection.

So our attention was now focused on Meg and Antonio. The flirtations felt electric. As expected, they were sophisticated, confident, and insightful. Based on our previous communications, I was confident that Meg and I would feel connected. But it felt so great to observe how the 4-way dynamic was taking off. Great chemistry is hard enough to find between two people, so it was the first time I had ever experienced such a positive 4 way dynamic. Just as I was feeling lost in the charm of Meg & Antonio, Dawna emerged with her boyfriend. It was all good and I enjoyed introducing Dawna to Meg. The six of us floated over to the dance floor. The guys parked at a table on the edge,  while the 3 of us girls ventured out together. “Party Rock Anthem” by LMFAO was the right song to have me shaking my ass.  We flirted, and laughed, and flirted some more. I had always enjoyed the soft touch of other girls, but it was still so novel to be extending that enjoyment onto the dance floor and into the sexual realm. I still wasn’t sure if I was bisexual or bicurious, but whatever the label, I knew that I liked what I was feeling with Meg and Dawna.

Midnight was approaching and the dance floor had thinned out as people migrated to the play rooms. The six of us finally decided to break away from the dancing and reunited near the dining area. Meg and G stepped aside for a short moment away from the group.  I could see that they were engaged in a flirty conversation. For the first time, it turned me on to imagine sharing G with another woman. They returned to us quickly, and G was smiling from ear to ear once again. Meg explained the proposal they had crafted together. “How do you all feel about getting a play room together? For tonight, we can focus on the 3-way girl connection, and then play with our own partners in the shared space.” That sounded perfect to me.  I felt intrigued by Antonio, but I was not attracted to Dawna’s boyfriend. I definitely didn’t feel ready to navigate how to say yes to one person but no to another person. So Meg and G had crafted a strategic proposal that helped me to feel safe, and unpressured.

I found myself imagining how it was going to feel to kiss Dawna… and Meg… and how excited I felt about this 3-girl experience that was unfolding.

Unfortunately, the play rooms were all full, so we waited together and spoke openly about sexual preferences and limitations. Dawna explained that she had always been attracted to girls, often enjoying her experiences with women more than the sexuality with guys in her life. She explained how much she adored her current boyfriend, and how grateful she felt for his support of her bisexuality. I felt a confusing attraction to both ladies, at a level unmatched previously. I found myself imagining how it was going to feel to kiss Dawna… and Meg… and how excited I felt about this 3-girl experience that was unfolding. It didn’t take long before a room opened up and the 6 of us quickly shifted into the space. The rooms were relatively tiny, with only a little walking space on each end of the king-size bed. But none of us cared about that. The novelty of sharing sexual space with the 4 people we had just met was exciting.

All of us had removed our clothes, and the 3 ladies met up in the center of the bed. All three men settled onto the edges of the bed mattress, just behind their own partner. The girls began caressing and kissing, a wonderful triangle of sensual affection. I reached back and placed G’s right hand on my hip. It felt amazing to be exploring these two beautiful ladies with the full support of my husband. He gently massaged my hip and ass, and reached down to softly touch my wet pussy. We made eye contact and his positive smile said everything. The interactions with Meg and Dawna were the most sensual I had experienced with other women. All 3 of us moved slowly, and I cherished every minute. Eventually, it was time to reconnect with the three men who had watched patiently and enthusiastically.  I felt a rush of primal energy as I moved G onto his back and mounted myself on top of him. His cock was as hard and large as ever, but I fearlessly inserted him deep into my vagina. Our strong connection felt enhanced and magnified by the evening’s dynamic developments.

Closing time was approaching at the club. The six of us hugged and said our goodbyes. As we started our drive home, G and I knew we had successfully launched several exciting friendships, and most importantly, we felt closer than ever to each other.  These two new friendships would evolve over time. The connection with Dawna would continue for several years and outlast her relationship with her boyfriend. And the connection with Meg and Antonio would evolve into something truly unique, standing the test of time to this day.

Hello, i'm Mrs. GenieWishes, I was a "good girl" who followed all the conventional rules; until my passion for dancing introduced me to the sex positive Lifestyle.  Now I mentor friends, lead groups,  & host events for our giant LS network. You can find me on Kasidie.com or GenieWishesEvents.com

The Latest Chapter of My Shared Wife